Slice of Life: Tense topics for a birthday breakfast

Tuesdays are for slicing about life. Join us at Two Writing Teachers!

Garth, Cecily, and I were waiting for our breakfast to arrive. It was Cecily's seventeenth birthday, and that girl LOVES to go to breakfast. Her favorite place is always crowded, so we had some time for talking, and I brought up the summer.

"How are you envisioning it?" I asked. "Are you wanting to be here or home for the better part of the summer?"

We have a house in Rhode Island that's close to the beach. With the girls driving and working, they've had some pretty great options about where to spend their time.

She wasn't sure. Didn't really care one way or the other. Just wanted to make money and hang with friends. Could pick up more hours where she's currently working.

"If you want to be here (in Rhode Island), then you should probably work on that now," I said.

My tone probably warranted an eye roll, and I got more than that. Where was breakfast when we needed it?

I recklessly moved on to college visits, recommendations, and the possibility of getting some of that done over the summer. Bad move. I wish I could remember the exact response for the sake of this post, but it was along the lines of Chill out, Mom. It's my birthday, from Cecily, and Lay off, Mel. Just have a relaxing breakfast, from Garth.

"I won't say another word about it," I said. (We all knew that's not true, but I could leave the planning-for-the-future topic alone for the rest of breakfast.) "You two can direct the conversation."

For a while, the conversation was tense, but breakfast came, and so did other conversation topics. Maybe some day I'll write a book about the fine lines between supporting, directing, nagging, and driving people insane, although I'm sure many have already been written, probably some by mothers with high school juniors.

Posted by Melanie Meehan at 3:56 AM 7 comments:

Tuesdays are for slicing about life. Join us at Two Writing Teachers!

Those of you who know my oldest daughter Larkin know that she can be pretty funny. You might also know that she can be a bit flighty-- she's an artist. She can even be a little wild-- comes with the territory when you're young, single, and living in Denver. So it's not going to surprise you when I share the series of texts I got over the weekend. 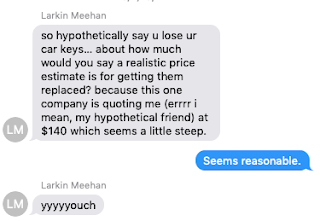 I didn't ask how she lost her keys-- or how her hypothetical friend lost their keys, and when I talked to her later that night, I still didn't ask. I do know she's on a tight budget, but we can't bail our kids out of everything, right?

That being said, last night, the key story continued: 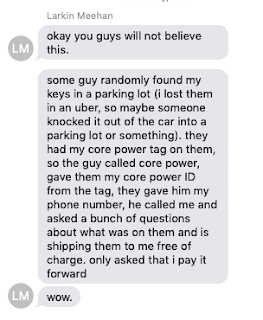 Whoever is responsible for returning Larkin's keys to her has asked that the favor is continued. I love random acts of kindness, so this is my slice for the week. Maybe the key-returner will get an even bigger return on his kindness investment by having me share it here.

Posted by Melanie Meehan at 3:56 AM 8 comments: