Slice of Life: A Greater Appreciation for a Colander

I'm doing my best to keep up with slicing on Tuesdays! All are welcome! Join us at Two Writing Teachers!

"Where did that colander come from?" Larkin asked as I drained the pasta. "And what are the designs in it? I love them!"
I transferred the pasta, and the two of us studied the pattern of holes. Stars, we agreed. I love Larkin's appreciation for both current, trending items and also old classics. She embraces eclecticism!
"They were my grandmother's," I said, pulling out the matching colander and holding them up for Larkin to appreciate.
Larkin is home for a couple of weeks, and it's a new home. She hasn't been here since we moved in March, and before then, many of our belongings, colander included, had been in boxes for several years. That's another story and slice, but I do remember unpacking the colander and being happy to see it. Not everything has to be new. Not everything is better new.
And the truth was, I had never really studied and appreciated the colanders until Larkin's noticing. Leave it to her to notice as an artist and appreciator of patterns and design. That being said, I always reach for my old colanders as opposed to the new and shiny one from Bed Bath and Beyond. Thinking about it, there's something about the weight, the smoothness, and the shape that works better than the newer ones. And there's also something about having Tippie's colander in my kitchen.
A few nights later, the girls were making pizza, and a friend with four much younger kids wanted to see what her future might hold, so I snapped a shot of the girls stretching the dough and chopping up toppings.
"That colander!" was her response. Her grandmother had that colander as well. 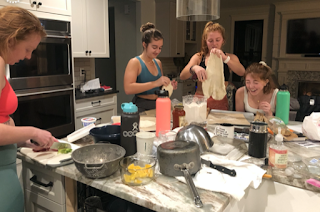 I love that a colander-- a tool that is for straining and cleansing-- has inspired memories, appreciation, and connections.
Happy Slicing,

Posted by Melanie Meehan at 5:25 AM