One Little Word 2022: Changing Up the Intention

The irony of my blog's name and my One Little Word for 2022 is not lost on me. I've had this blog for a while now, and when I was trying to think of names for it, the Nike slogan inspired me. Just Do It is a phrase that has inspired me throughout many challenges. Just Write, Melanie seemed like a great mantra for getting my fingers going on the keyboard.

But what if I'd gone with Write, Melanie instead? Somehow that one doesn't have the same cadence. Or, does it sound more emphatic? More assertive?

Over the last several years, I've chosen words for the intention of paying attention to them, of living with them, of having them guide me. My first word ever, present, remains my favorite, mostly because of its multiple meanings. Since living with that word in 2014, I've worked to become a better gift-giver (inspired by present as a noun), I've tried to be more engaging in presentations, and I've nudged myself-- though still working on it-- to pay more attention to who I'm sitting with and what I'm doing. Other words have become part of my emotional fabric, as well, inspiring me to be braver, more appreciative, and kinder to both myself and others. But, maybe it's just as important to be less of something as it is to be always reaching for more.

When I initially contemplated eliminating a word for 2022 as my One Little Word intention, it was because I realized that there was an element of arrogance in what I was saying when I use the word just. "You just..." seemed to undermine the effort someone was putting into learning or trying something new. And then, when I googled to see if anyone else had taken issue with the use of "just", I came across this post,  pointing out the hedging quality of using it. In addition to thinking about words to eradicate or minimize, throughout 2021, I've found myself weeding out what I don't prioritize. Earlier tonight, I had a conversation with close friends about how the pandemic has inspired me to think about risks the way I think about food. What is worth having, and what isn't? Some risks aren't worth taking. Likewise, some words aren't worth using, and may even be damaging or undermining.

This year, in 2022, a year that I'd like to be different than the last couple, I've decided to try something different with my One Little Word. Instead of taking on a word I want to live with, I'm going to take on a word I want to live more or less without. I like the word 'just' as an adjective, and I'll use it to reach for fairness and equity, but as an adverb, I will be working just to just eliminate it. (See what I did there? If you read the Byrdie post, you'll recognize the confidence that rises without that four-letter j-word compromising the intention.) No more "just calling to say hi", no more "just checking in", no more "just one more thing." And definitely no more "you just do ___."

So, for 2022, I'm changing up my practice. Instead of leading with a word, I'll be working on eliminating one, or at least paying attention to and lessening its use. Wish me luck! 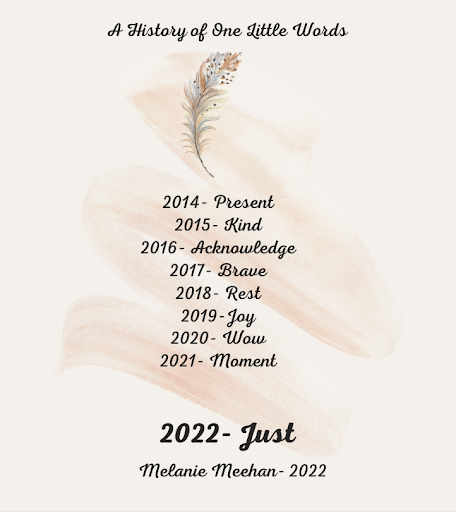 Posted by Melanie Meehan at 7:48 AM