Slice of Life: A Memory For the Long Run

On Tuesdays, I write slices of stories from my week! All are welcome! Join us at Two Writing Teachers!

When I was in college, I managed the men's lacrosse team. How that began is another story for another time, but during the years, I was there, the team was good. My first year as manager was the most memorable, and the season ended in the last 30 seconds of the national championship when Johns Hopkins scored the winning goal against us. My most vivid memory of my three years of managing remains the captains leading the team to stand below the fan section, tears streaming down their faces, clapping in appreciation for all of the students, families, and friends who had been there.
I shared that memory with my daughter, Julia, as her Division 3 soccer team prepared for the national semifinal which was last Friday in Greensboro, North Carolina. Circumstances and COVID have led to Julia being a three-year captain of the team, along with one of her best friends. "Whatever happens," I said, "you and Emily are the team leaders. Everyone who is there could remember how you react, win or lose, for a long, long time."
I couldn't tell what Julia internalized from what I said, but I do know that she thinks deeply about her leadership and the legacy she is leaving. When the final whistle blew at the end of the game with her team losing 1-0, she couldn't have made me prouder. The team circled, arms around each other, supporting each other. 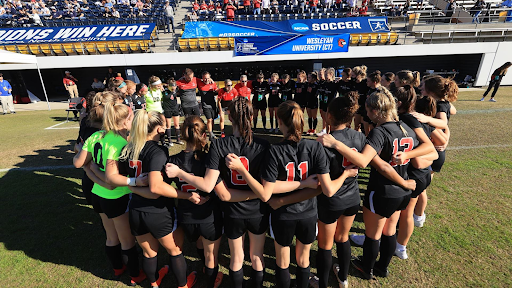 As the cheering section continued to clap in support of a history-making season, Julia and Emily led the line toward the bleachers and clapped back. There were tears, for sure, and hopefully, as the days pass and the disappointment of losing lessens, there will be pride for an incredible career and an epic run.
The lacrosse final was in 1987, almost thirty-five years ago. I hope that the memory of my girl leading the team in appreciation-- despite the tears-- will be with me thirty-five years from now. It's a memory that I will carry with me for as long as I can.

Posted by Melanie Meehan at 2:20 PM